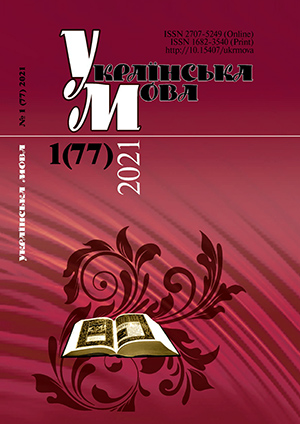 Scientific journal Ukrainian language is registered by the Ministry of Justice of Ukraine as print media (Certificate: Series КВ № 12180 – 1064 ПР of January 12, 2007).

Sphere of distribution: nationwide and foreign

Edition is included in the Register of scientific professional publications of Ukraine (Order of Ministry of Education and Science of Ukraine by № 528 of Мау 12, 2015)

Editorial board:
19 persons, 1 of them – Corresponding Member of the NAS of Ukraine, 2 Foreign Members of Academies (Poland, Slovakia), 17 – Doctors of Philology

Thematic orientation:
topical issues of modern structure, codification of the norms of the Ukrainian literary language, problems of history, social and state status of the Ukrainian language, informing the scientific and general public about the latest techniques and methods of learning Ukrainian and other languages ​​of the world

Rubrics of the journal

An electronic version of the scientific-theoretical journal “Ukrainian Language” is available on the site of the V.I. Vernadskyi National Library of Ukraine
http://www.irbis-nbuv.gov.ua/

Scientific publications and publishing activity of NAS of Ukraine
http://www.nas.gov.ua/

Bibliometric profile of the magazine at Google Academy
https://scholar.google.com.ua/ 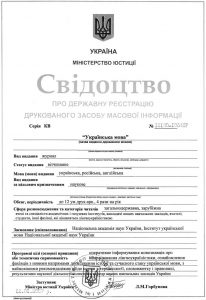 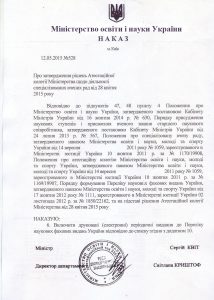 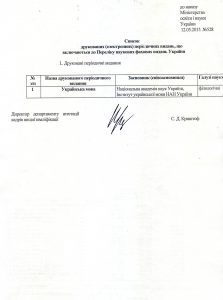 The mission of the journal is to publish the valuable papers that inform about the use of the Ukrainian in society, about a description of the theoretical issues in grammar, lexicology, terminology, stylistics, phonetics, history of the Ukrainian language, the relations between standard language and dialects, about the language culture, orthography, language policy in Ukraine and also the current problems of methodology in linguistics

The journal pages publish reviews of novelties in Ukrainian linguistics and reviews of publications that are a prominent phenomenon in linguistics. Also, the journal publishes articles on the anniversaries of prominent linguists, and highlights issues raised in linguistic forums, symposia, conferences, and congresses.

All articles sent to the editorial board of the Ukrainian Language journal are reviewed and edited. Journal editors take at a decision on submitted manuscripts.

On the recommendation of the reviewer (s), according to the decision of the editorial board, they are accepted for printing, sent for revision or rejected.

At the request of the editorial board, some articles are submitted with external reviews.

The journal is a subscription publication